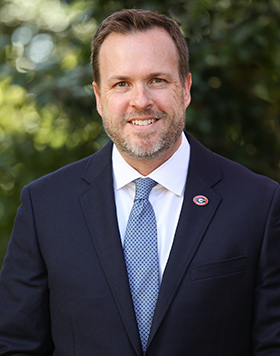 Rob Gordon serves as the Director of the University of Georgia’s Carl Vinson Institute of Government. As Director, Rob leads a diverse team of experts who inform, inspire, and innovate so that governments, large and small, can be more efficient and responsive to their citizens, address current and emerging challenges, and serve the public with excellence. Through its work with governments across Georgia and beyond, the Institute of Government provides the knowledge and skills that elected officials, professional staff, and appointed board members need to manage effectively in the 21st century.

Rob has provided education and technical assistance to the Georgia General Assembly, State of Georgia agencies and offices including the Governor’s Office of Planning and Budget, Department of Economic Development and Department of Community Affairs, numerous local city and county governments, and various governmental authorities on a wide range of finance and community and economic development issues. In addition, Rob previously served as First Vice President of Public Finance at Davenport & Company LLC where he provided financial advisory services to local governments, utilities, authorities, non-profits, and other governmental entities across the state of Georgia.

Prior to his appointment to UGA’s faculty, Rob practiced law at King & Spalding LLP in Atlanta, Georgia and then Troutman Sanders LLP in Richmond, Virginia, where he served as bond and underwriter's counsel for nearly $4 billion of tax-exempt and taxable financings.

In addition to serving as Director of the Institute of Government, Rob holds Affiliated Faculty status in UGA’s School of Public and International Affairs where he has taught courses on public finance and economic development in the Master of Public Administration Program.

Rob received his J.D. degree, with honors, from The George Washington University Law School and his bachelor’s degree in finance from the University of Georgia. Prior to attending law school, Rob served the U.S. Department of State as a Special Agent with the Diplomatic Security Service. His assignments included the San Francisco Field Office, the U.S. Embassy in Tirana, Albania, and the Secretary of State’s Protective Detail for Secretary Madeline K. Albright and Secretary Colin L. Powell.

Rob is a graduate of the Leadership Georgia class of 2013.