Beyond the Classroom: Bringing new vibrancy to Georgia cities 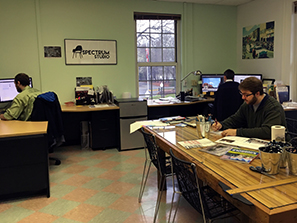 Beyond the Classroom: Bringing new vibrancy to Georgia cities

Stepping into the Renaissance Strategic Visioning and Planning studio at the Carl Vinson Institute of Government feels a lot like walking into an artisanal workshop. This carefully crafted environment of drafting tables and drawing tools is where faculty member Danny Bivins and a team of faculty, staff and trained students work on downtown redevelopment and planning for communities in Georgia.

The services here are both in-demand and effective in helping revitalize Georgia cities by creating master plans that can be selectively executed by the community. RSVP plans have already been created for Jesup, Villa Rica, Cairo and Perry, just to name a few. The team’s designers employ a comprehensive approach to redevelopment from organizing city hall-style meetings and surveys to constructing sketches and visual aids. In the collaborative outer room, I saw pictures of the current community the team is working with. The photos were flanked by multiple superimposed before and after renderings of art projects, historic sites and downtown scenes to help community leaders and residents envision what could be created in their city. All of this data is synthesized in one easy-to-read book that can take months in the making. Through the plans in the book, local decisions-makers can look at architectural options and choose which ones to prioritize as a part of revitalization efforts.

In talking to Bivins, I was able to learn more about how he adapts his vision to a client’s needs. He explained the importance of having an extensive conversation with local officials and residents about what they want to see changed. “When starting any new project, we first ask, ‘Where are we now?’ Second, ‘Where are we going?’ And finally, ‘How do we get there?’ ” To help make it work, cities get support from groups like the Georgia Municipal Association, its affiliated Georgia Cities Foundation and the Lyndhurst Foundation. Bivins explained that this degree of institutional support has made the biggest difference in the team’s success. The partners aid the Institute in matching the team’s expertise with their resources. With an unparalleled model to similar services, the RSVP team has developed its own promising vision of “where are we going.”

Ultimately, a lot of times the team goes back to the drawing board and makes revisions aiming to better integrate the community’s culture and tradition into the final RSVP proposals. Bivins showed me the before and after pictures of a suggested water splash pad in one of the communities that was given a master plan. Here the design of redevelopment cleverly integrated the physical space the area already had. In other examples, he explained how something as simple as a chain-link fence when painted or adorned with a lighted town sign could go from an eyesore to a photo op. This was the best way one can hope to learn about downtown planning—from assessing needs to execution—by talking to artists discussing their trade, and it’s all rooted in those framing questions. The result is a detailed written RSVP plan, where the first few pages show current images of the city and the next part exhibits a treasure-trove of ideas on how to get one step closer to preserving a city’s unique Southern charm in an ever-growing state. 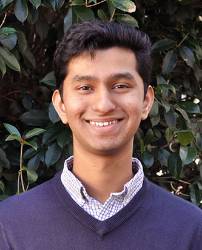 Varad Dabke is a third-year English and international affairs major from Columbus. He is the public and alumni relations chair for the UGA Undergraduate Mock Trial program and serves as an expert witness in simulated trial competitions. Varad also was selected for a faculty-sponsored research assistantship with the Center for Undergraduate Research Opportunities. After graduation, Varad hopes to pursue a career in the legal field.