Beyond the Classroom: Making Census 2020 count for Georgia 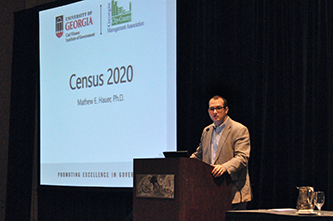 Beyond the Classroom: Making Census 2020 count for Georgia

Faculty member Matt Hauer was appointed to Georgia’s Complete Count Committee for Census 2020 in recognition of his expertise as head of the Institute’s applied demography program and his experience with the last census.

Gov. Nathan Deal created the committee in November with a goal of ensuring that the state could raise awareness for a complete and accurate count in Census 2020. Because the Institute’s Applied Demography Program currently helps analyze similar data for local communities, Hauer’s research to date perfectly complements this new role on the Complete Count Committee. He joins several other experts and state representatives in helping to create a plan to raise public awareness and ensure accurate collection of information such as population size, income and racial or ethnic makeup in the state.

How will the state manage to execute such a large undertaking? Whereas the simple answer is that it’s for the committee to decide before 2020, the committee has the advantage of being able to reference time-tested strategies for census response studied at the Institute. One such strategy is the Local Update of Census Addresses, which helps government officials verify additional new addresses to ensure they receive census questionnaires. LUCA is the only opportunity for Georgia officials to submit updated addresses prior to the actual census. If updates aren’t filed by government officials, then it may result in an incomplete count when residential addresses established since 2010 don’t get census questionnaires or census forms are sent to the wrong address.

In Census 2010, for example, 9.1 million new resident addresses were registered that would not have been properly accounted for otherwise. Hauer’s program currently provides technical expertise and training to communities about LUCA in addition to other research goals. While LUCA is not explicitly tied to the work of the Complete Count Committee, Hauer’s expertise in these strategies will serve as a valuable tool in creating their awareness plan.

Hauer compared the committee’s task to a “Get Out the Vote” rally. Here, instead of motivating a resident to vote, the committee is working to motivate residents to respond to census surveys in a timely manner by relaying the importance of census data at a local level. This includes spreading awareness on how accurate census data could mean better funding for Georgia because the Census Bureau distributes around $400 billion dollars in government funds.

While committees like these aren’t uncommon practice for other states, the Institute of Government’s connection with state and local government places it in a unique position to similar committees. Hauer explained that after the 2010 census, Georgia gained an additional seat in the U.S. House of Representatives. Data from Census 2020 also will be used to determine congressional representation, as well as congressional and state redistricting and federal funding allocations.

Hauer’s appointment to the Complete Count Committee is an example of how work at the Institute taps directly into public service for the state. Whether through committees, training sessions or data analysis, the Institute’s applied expertise in Census 2020 matters exactly where it counts at the local, regional and even federal level.

Varad Dabke is a third-year English and international affairs major from Columbus. He is the public and alumni relations chair for the UGA Undergraduate Mock Trial program and serves as an expert-witness in simulated trial competitions. Varad also was selected for a faculty-sponsored research assistantship with the Center for Undergraduate Research Opportunities. After graduation, Varad hopes to pursue a career in the legal field.