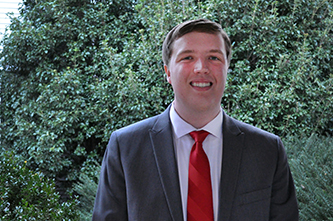 Throughout my childhood, I learned from my parents about the importance of politics, specifically the impact that state and local governments have on our everyday lives. My long-lasting passion for Georgia politics led me to follow the 2018 gubernatorial race closely. During this race, I developed an interest in the plans that both candidates proposed for economic development to continue the growth in business recruitment and expansion experienced during Gov. Nathan Deal’s term.

Conversations with economic developers in rural Georgia during a statewide tour sponsored by Leadership UGA increased my interest as I saw the impact that a few new jobs can have on a smaller community.

Elected and appointed officials in Georgia are subject to transparency laws in the interest of maintaining open government. However, economic developers in Georgia are often exempt from these laws if business deals meet certain criteria for jobs created and dollars invested. Both elected officials and private companies have responsibilities in this process. Elected officials must adhere to the letter of the law and answer to their voters, while private companies must keep negotiations private to keep their competitors unaware of their future plans and to please their shareholders.

As a Vinson Fellow, I plan to work with my faculty mentor Stacy Jones to explore the tension between the requirements of the law, the desires of economic developers and the job of communications practitioners to maintain the image of their public or private employer. The primary method of my research will involve interviews with professionals in the fields of law, academia, journalism, communications and economic development.

This project will enable me to better understand the merits of transparency laws and open government while also providing greater understanding of the process of economic development which sparked my interest during the gubernatorial election.

Austin is a junior from Stone Mountain, studying political science and public relations with a certificate in public affairs. Austin has held multiple leadership roles in student organizations at UGA, such as The Arch Society, the UGA Wesley Foundation, the Student Government Association, Digital Dawgs and Leadership UGA. After studying in Italy, Austin began serving as a student recruiter for the Center for the Study of Global Issues (GLOBIS). As an Honors Policy Scholar, he researched ways to expand open educational resources at UGA and has done research on the changing demographics of Gwinnett County and Georgia’s 7th Congressional District.