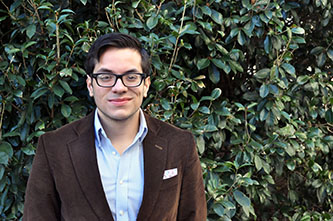 Imagine a Mexican family moves into a primarily immigrant neighborhood in Gwinnett County. How long will it take before their wages match that of the Mexicans who have been there longer? And what factors affect this process of economic assimilation?

To many immigrants, coming to the United States is a dream that has finally become a reality. That reality, however, still has difficulties. Most immigrants see improvements in wages and standards of living, but that improvement takes time and depends on multiple factors.

The rate at which an immigrant’s wages rise, and the pace of the increase in standard of living in general, is thought to be directly related to education. In my research, I explored the relationship between English skills, one specific element of education, for Latino immigrants and their rate of wage growth.

Using Census Bureau data with assistance from faculty mentors Matt Hauer and Wes Clarke, I used a regression coefficient to estimate the strength of certain assimilation effects for nearly 40,000 immigrants. The number of years in the United States had by far the biggest effect on wages, with wages increasing by 0.7 percent each year. Unsurprisingly, the next-biggest determinant is education, with each extra year of schooling increasing wages by 2.6 percent.

Our effect of interest, English skills, also has a statistically significant effect on wages; native English speakers enjoy more than a 6 percent premium over immigrants solely due to their English skills. These effects become relevant once we observe that the mean wage for Latino Immigrants is a relatively small $27,862 per year.

These results add to the discussion of economic assimilation of immigrants. For immigrants to see their standards of living rise, they must spend more time in the United States, seek more education, and better their English skills.

A sophomore from Atlanta, Sebastian is participating in the combined bachelor/master program in economics. He serves as a graduation coach, intern and executive with Hispanic Organization Promoting Education (HOPE), the Georgia Political Review, UNICEF at UGA and the Multicultural Business Student Association. He also works with the Georgia Association of Latino Elected Officials and has volunteered on the election campaigns of Jon Ossoff and Jim Barksdale.