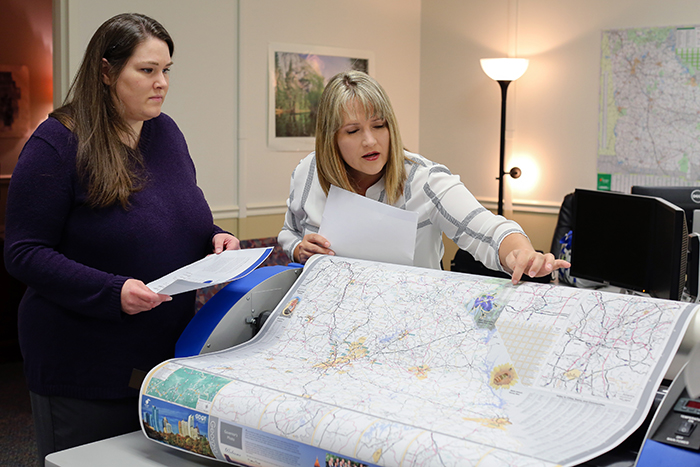 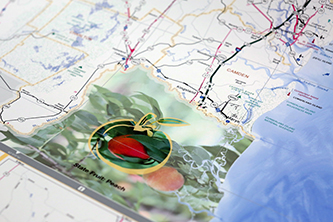 Motorists exploring Georgia’s travel treasures can unfold a colorful copy of the Official Highway and Transportation Map to find the easiest way to reach their exciting destinations.

And for 20 years now, the Carl Vinson Institute of Government has helped the Georgia Department of Transportation (GDOT) produce fresh editions of the map. The newest map was just published, after nearly a year of improvements and revisions by a team of Vinson Institute cartographers and GDOT graphic designers.

Copies of the two-sided, large-print map go to welcome centers in quiet downtowns and along busy interstate highways, to GDOT’s seven district offices — and even online, so people everywhere can view an electronic version.

In the springtime every two years, Wiegand and Wheeler begin discussing proposed design changes to the map and start incorporating additions and corrections submitted by GDOT offices, other state agencies and transportation departments in neighboring states. Wheeler uses ArcGIS, a commercial geographic information systems (GIS) software package, to update road locations, colors, imagery, typography and other map elements to reflect the changes that GDOT requests. This year, she rebranded the map with GDOT’s new logo and color palette and added the location of camping shelters to the map’s Appalachian Trail inset.

“It’s a lot of work. We have to use several kinds of software to get it done,” Wheeler said. ArcGIS and ArcMAP are the go-to programs, but she and Wiegand also use creative design software like Adobe Illustrator to fashion the panels that serve as the front and back covers of the folded map.

GIS allows GDOT editors to electronically capture changes like road widening and new highway construction year round, but even so each production cycle requires a massive number of revisions, Wiegand said.

“The scope of the change is lost on everybody. Every single thing that we show on there has to be checked. I have an eight-page review checklist,” she said.

The presses roll late in the year and cartons of crisp, new maps arrive at GDOT headquarters in mid-January for distribution to GDOT district offices and the Georgia Department of Economic Development, which delivers maps to welcome centers throughout the state. Travelers and newcomers who look closely can find three hidden marine animals and the acknowledgement that “This map was produced by GDOT’s Office of Transportation Data and the Carl Vinson Institute of Government at the University of Georgia.”

While it’s satisfying to share the production credit, the map project represents just one of the Vinson Institute’s dozens of partnerships throughout Georgia, according to Institute of Government Director Laura Meadows.

“We work with state, local and regional agencies on dozens of initiatives that improve Georgians’ lives and strengthen our communities, from rural economic development to helping drivers get to their destination without missing a turn,” Meadows said.