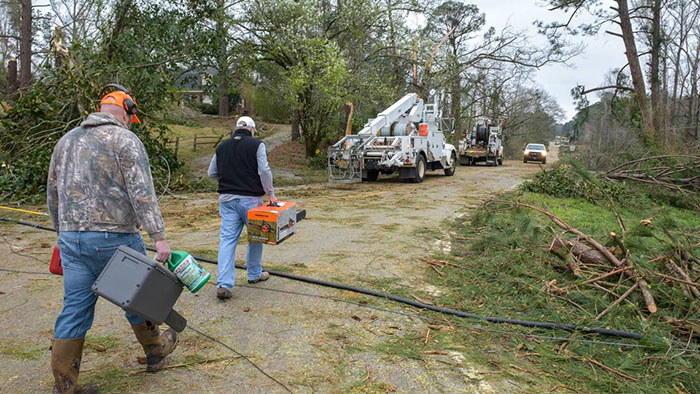 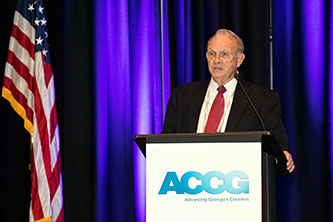 Harris County Commissioner Harry Lange had no inkling that a storm was brewing when he took a disaster preparedness class the Carl Vinson Institute of Government presented last autumn.

But five months later, when a tornado churned through his west Georgia community, Lange and Harris County first responders had an up-to-date disaster response plan in place to inform their recovery efforts.

“My feeling was, ‘We know how to respond to this.’ We had reviewed the preparedness plan, updated it and we knew what bases we needed to touch,” he said.

In October, Lange attended the Disaster and Emergency Preparedness class that faculty member Mara Shaw delivered at a training conference the Institute of Government presented in partnership with the Association County Commissioners of Georgia (ACCG).

The class inspired Lange to return home, dust off the Harris County disaster response plan and make sure it agreed with what he’d just studied. He also spearheaded an effort to update the plan and prioritize response and recovery needs.

Then, on March 3, a tornado ripped through Harris County, damaging homes and leveling thousands of trees.

County Manager Randall Dowling says Lange’s takeaway from the class provided a disaster response refresher for the Harris County leaders who ended up managing the tornado recovery effort. “I think that the response was smoother since the county had a recent update to its operation plan,” Dowling said.

County leaders were better prepared for crisis decision-making and primed to conduct a reflective review of how well the county responded to the emergency, according to Lange. The tornado flattened most of the trees in a newly completed park, so county leaders quickly decided the park could temporarily serve as a storm debris drop-off site for cleanup crews and the public, he said.

And on May 29, Lange held an emergency response assessment meeting with department heads and other commissioners to review lessons learned, discuss how the plan worked and what they can do better. “We will then update our preparedness manual for disasters based on that post-event review,” he said.

The daylong Disaster and Emergency Preparedness class Lange attended is part of the Lifelong Learning Academy continuing education program the Institute and ACCG provide for commissioners and other county government officials. The class is designed to help county leaders learn more about out how planning can improve disaster response, explore their roles and responsibilities and offer practical guidance on post-disaster action steps, Shaw said.

“At the end of the day, Harry commented about how much he had learned about his role in an emergency situation and the homework he needed to do when he got back to Harris County,” she said. “Then, he put his learning into action. That’s the way it’s supposed to work.”