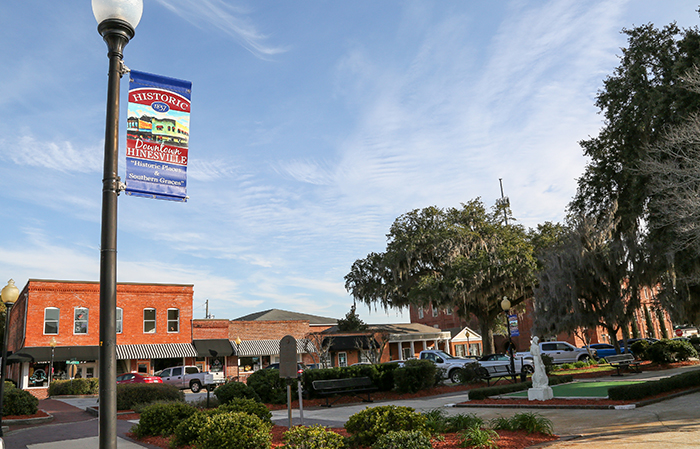 The City of Hinesville has secured additional funding to redevelop an urban park for a downtown revitalization initiative informed by the Institute of Government’s Renaissance Strategic Visioning and Planning (RSVP) process.

The city recently received a $136,567 Georgia Power Foundation grant to support Bradwell Park improvements as part of a broader community-based program to encourage private, family-friendly redevelopment on the surrounding streets. The city also has allocated $700,000 in local sale-tax revenue and $52,000 in federal funding for the park, located next to the Liberty County Courthouse in the heart of Hinesville’s central business district.

Parking improvements and pedestrian-friendly crosswalks at Bradwell Park are part of the RSVP plan the Institute developed in collaboration with community stakeholders and the University of Georgia College of Environment and Design. The RSVP process, developed in partnership with the Georgia Municipal Association, the Georgia Cities Foundation and the Georgia Department of Community Affairs, helps cities create a vision, action plan and short-term work program through public input and engagement, according to Institute faculty member Danny Bivins.

“Hinesville wants an area of their downtown where they can focus their efforts on a family-friendly district. The center of their downtown district would be Bradwell Park, which can become a catalyst for development,” Bivins said.

The park also will get environmentally friendly green infrastructure, like absorbent paving to control stormwater runoff more efficiently, developed through a demonstration project with the city government and Liberty County. That project is supported by a $118,445 federal grant to model effective urban and residential-scale practices in Bryant Park, a larger green space southeast of downtown, to provide practical examples for communities throughout coastal Georgia, according to Institute faculty member Scott Pippin.

“The RSVP is just one phase of what we hope will be a long-term relationship to help Hinesville achieve their goals to become a more vibrant, resilient community,” Pippin said.

Other elements of the city’s revitalization initiative are planned or were in the works even before the RSVP project was completed earlier this year, according to Karen Durham, who this spring retired as executive director of the Hinesville Downtown Development Authority.

For example, the city obtained Georgia Department of Transportation funding to realign the entrance of Bryant Park with a main street leading downtown, Durham said. The city plans to extend its streetscape from downtown to the new intersection to create an attractive travel corridor into the central business district.

In addition, the city created a matching grant program to assist with façade beautification in the central business district and established a $90,000 revolving loan fund to help businesses repurpose downtown buildings for restaurants, retail and loft apartments, Mayor Brown said.

The RSVP plan was developed with extensive community input and identified four major goals to strengthen Hinesville’s economy. In addition to creating a downtown destination for retail and dining, the community also plans to focus on economic development incentives, housing improvements and celebrating the city’s history.

“I can just see the downtown capitalize on all of this. Things are happening already,” Brown said.