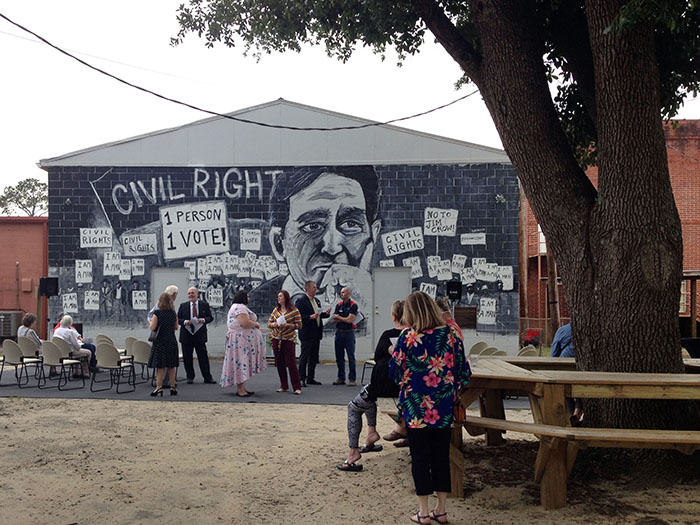 The idea of paying homage to a famous native son with a wall-size portrait is helping to ignite a renaissance in Fitzgerald, a historic south Georgia city.

The mural depicts Morris Abram, a civil rights attorney whose legal efforts helped overturn Georgia’s county unit election system. Honoring Abram with a mural outside the Fitzgerald-Ben Hill County Arts Council is one of several revitalization projects that Georgia Downtown Renaissance Fellow T. Clark Stancil designed to help the city capitalize on its rich history and draw tourists off the nearby interstate.

And now, nurtured by Renaissance Fellowship ideas and the city’s own economic development planning, Fitzgerald is on the verge of blossoming into an outstanding visitor destination, according to Tourism, Arts and Culture Director Brandy Elrod.

“We’re beginning to catch people’s attention,” Elrod said. “Public art was one of the things that we discussed that would make the area more pedestrian-friendly and a place people would want to spend time in.”

Stancil, then a landscape architecture student with UGA’s College of Environment and Design (CED), designed the Morris Abram mural during his 2014 Renaissance Fellowship as a way to convert a courtyard behind the arts council into an attractive public space. He also suggested adorning the empty lot with soft lighting and surrounding a shade tree with tables and chairs to encourage visitors to linger.

The fellowship is an Institute of Government partnership with the Georgia Municipal Association and the Georgia Cities Foundation that pairs student designers from CED with communities around Georgia. Fellows help cities address local issues through design and technical assistance over the course of a 12-week summer fellowship.

After completing his fellowship, Stancil earned his degree from CED, became a full-time design specialist with the Institute of Government and turned his attention away from Fitzgerald to other community revitalization projects. Then, this spring, a message popped up on Stancil’s phone that brought him back to Fitzgerald.

“Out of the blue I got a text. It was just a single image of the mural being installed,” he said. “I was just blown away.”

Stancil learned that the City of Fitzgerald obtained a Georgia Council for the Arts grant to commission the mural. Next, he got an invitation to join Abram’s daughter, Ruth, to help the city dedicate its new “Morris B. Abram Mural.”

The mural is one of several designs from Fitzgerald’s Downtown Renaissance Fellowship that the city is implementing or has incorporated in a tourism development plan that began in 2018, according to Deputy City Administrator Cam Jordan. Creating a downtown pedestrian and tourism district was inspired by the fellowship and moving two historic monuments to more accessible sites was a direct recommendation, Jordan said.

“We’ll be continuing to work on aspects of Clark’s Renaissance designs through the rest of this five-year work plan,” he said.

Stancil enjoyed learning about Fitzgerald’s history and using it as one of the themes in his Renaissance Fellowship project. “This all took looking back at their history and finding out what was important to them,” he said.

Elrod said the city is going forward with other projects based on the city’s history. The Georgia Council for the Arts grant also funded a mural of one of the free-roaming chickens that add another unique element to the city. The chickens are feral descendants of Brazilian game fowl the state released as hunting stock; they quickly learned they could find safety in the city. And, a 62-foot topiary chicken designed to be taller than the KFC Big Chicken in Marietta is also planned for the downtown tourism district, she said.

“We’re just on the cusp right now,” she said. “Tourism could drive our economy a little more and could be a job-creator.”