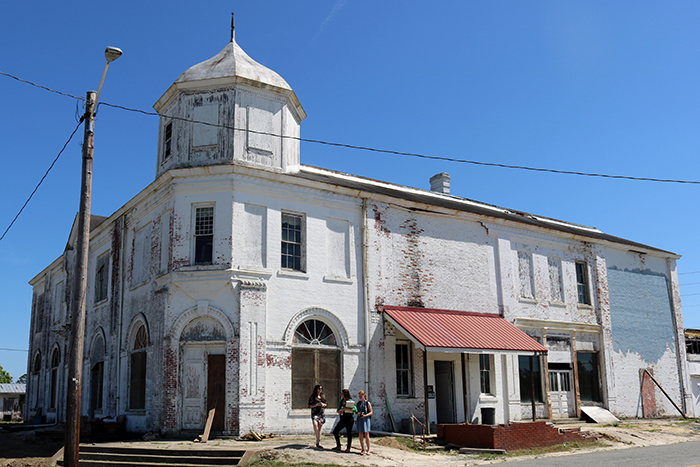 A dilapidated 19th century hotel in downtown McRae-Helena is being restored to house a restaurant, sports bar and tasting room. The town pharmacy, Ryals Drug Store, was renovated and an urgent medical care center moved into an empty storefront. A flower shop opened nearby.

The city government is negotiating with the owner of an historic theater to have it donated to the city for community space. 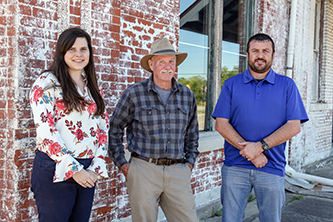 The downtown transformation began after McRae and Helena, contiguous cities situated at a rail crossroads in Telfair County, were merged in 2014.

McRae native Liz McLean graduated from UGA in 2013 and returned home, first taking a part-time job as a city clerk and later editor of the local newspaper, the Telfair Enterprise. In 2015, McLean was named city manager with oversight of the new development.

She now lives in one of the downtown lofts.

“The apartment redevelopment has been what’s spurred the development in this block,” McLean said.

That’s just one example of the renewal that’s taken root since the two cities merged. A new generation of government leaders like McLean and McRae-Helena Mayor Mike Young challenged the community to take a more innovative approach to problem-solving and began paying more attention to downtown redevelopment, and that inspired businesses and private citizens to do the same.

“The merger opened people’s eyes that everyday problems can have creative solutions,” McLean said. “The private investment is part of the transformation. The city is investing in downtown, and in doing so, I think we are encouraging private investment.”

In addition to five new loft apartments and the urgent care center, a new barbecue restaurant opened downtown. A historic home on the edge of downtown was repurposed to house Holly Diana Floral, and Ryals has expanded its inventory to include clothing and home goods, McLean said.

Besides encouraging redevelopment, consolidation also saved Helena about $6.5 million in wastewater treatment plant costs. The city was running out of wastewater capacity before the merger. The consolidated city budgets saved taxpayers $1.7 million, said Young, who served as Helena’s mayor before the consolidation.

The merger, facilitated by the UGA Carl Vinson Institute of Government, was the first between two cities in almost 100 years.

“You’ve got two different revenue streams, two different sets of ordinance codes—all kinds of differences between two cities on things like alcohol regulations, rates of taxation and zoning requirements,” he said. “There’s no state legal framework for city-to-city consolidation in Georgia, and there’s no precedent.”

Despite the obstacles, the cities officially united on Jan. 1, 2015, with a celebratory swearing-in ceremony at 12:01 a.m.

Five months later, McLean became city manager, but the groundwork for the city’s rebirth had already been laid. In 2014, the city completed a streetscape project to beautify a block in what had been the city center of McRae. Supported by federal transportation enhancement funds administered by the Georgia Department of Transportation (GDOT), the city hired a contractor to renovate sidewalks and install brick pavers, decorative lighting and a new crosswalk.

The streetscape activity motivated one property owner to start fixing up his buildings, and that encouraged others. So far, nine buildings in that block have been completely renovated or had significant façade improvements, McLean said. “When public funds are spent on beautification projects, it tells residents and property owners that our community is worth investing in,” she said.

McLean continued to pursue revitalization projects, and in 2018 the city was selected for the Downtown Renaissance Fellows program that the Institute of Government manages with the Georgia Municipal Association, the Georgia Cities Foundation and UGA’s College of Environment and Design (CED). The fellowship is a 12-week summer internship that pairs CED landscape architecture students with Georgia cities to work on downtown improvement projects.

“The Fellows Program was a great way to help community leaders and business owners to get involved with the idea of downtown revitalization and see what the potential for our community is,” she said. “I think that it has widened the scope of what people think will be possible here and paved the way for bigger ideas for our downtown.”

The Renaissance Fellows also provided design ideas for the old Telfair Hotel, the 19th century Helena landmark that a private developer is renovating.

Local businessman Russell Cravey had bought the old hotel at a rail junction next to the original Helena train station, and planned to tear it down. He was encouraged by the community and the revitalization taking place to instead restore the building with its ornate brickwork and lofty ceilings.

When it is complete, Cravey wants to create a tasting room where visitors can sample beers, wine and distilled beverages made throughout the state.

“All of those companies have their own outlets, but there’s no single place where you can go and try everything that Georgia produces,” Cravey said. “I could put everything in one place and promote those products across the state.”

Now, McLean is striving to get approval to establish two opportunity zones—one for each of the two separate downtown districts in the combined city—to further encourage redevelopment. Despite the recent loss of Husqvarna, which employed 1,0000 people, city leaders are optimistic about the future.

“It’s hard for a lot of people to see sometimes,” City Councilman James McLaughlin said, “but we’re moving in the right direction.”