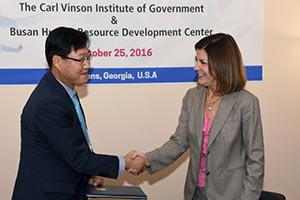 Meadows and Bum-Chul Lee, the center's director general, formalized the agreement during a meeting at the Institute's Lucy Cobb building. Taesik Yun, the Institute's Korea program coordinator, and officials with the Busan H-R Development Center will work out details of the partnership. In addition to governance training, the collaboration may include internships, applied research and policy analyses, and related programs, according to Meadows.

"Cooperative training and exchange programs like these are important to our continued work in Korea. We're excited about exploring new partnership opportunities with the Busan Metropolitan Government," she said.

The Institute worked with Lee and other Busan officials over the past year to lay the groundwork for the new program. The partnership builds on the Institute's 10-year record of providing professional development and training opportunities for Korean government leaders. Since 2011, the Institute has coordinated customized training for officials with the Seoul Metropolitan Government and the Governors Association of Korea.

Lee first came to UGA in July 2015 as a visiting scholar through an appointment the Institute arranged. In October, he returned to campus with nine other selected Busan administrators to finalize the training agreement and inaugurate the Institute's first short-term training program for Busan. Course topics included local government in the United States, government finance and budgeting, and development collaborations involving UGA agencies such as the Archway Partnership.