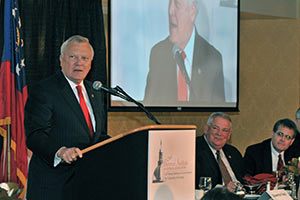 Nearly 230 members of the Georgia General Assembly attended presentations covering economic development and other significant issues at the 29th Biennial Institute for Georgia Legislators, coordinated by the Carl Vinson Institute of Government to help prepare lawmakers for the next legislative cycle.

Deal helped set the tone for the 2015 legislative session with a luncheon speech describing how cooperation between the state's executive and legislative branches have contributed to Georgia's economic vitality. He also detailed Georgia's successes regarding criminal justice reform and outlined some specific policy initiatives he hopes the legislature will undertake during the 2015 session.

Over the subsequent two days, the Biennial sessions, moderated by Institute faculty, explored a diverse set of state priorities, including economic development and job creation, opportunities for growth in Georgia and abroad, and the roles transportation, education, and health care play in Georgia's vibrant economy.

Almost all of the state's 56 senators and 180 representatives attended the Biennial Institute, including nearly two dozen who are starting their first terms. The Biennial offered these freshmen legislators the chance to network with their new colleagues and learn more about key matters they will face as they represent their constituents in Atlanta. The Institute also provided a unique introduction to state government and the budget process specifically for freshmen legislators.