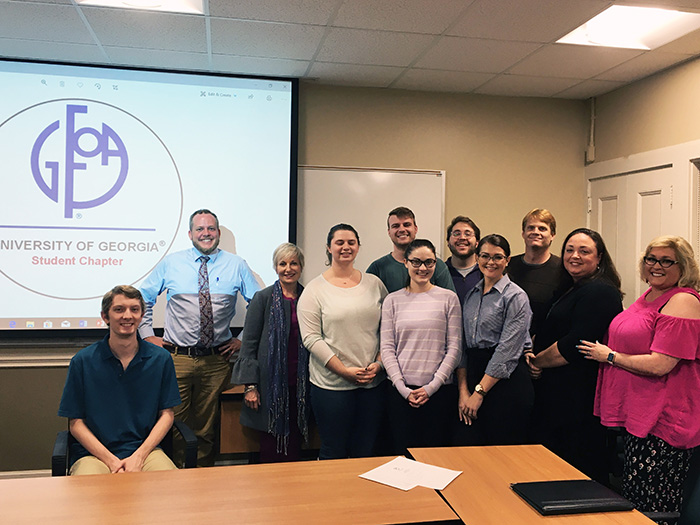 The University of Georgia has established one of the country’s first student chapters of the Government Finance Officers Association (GFOA).

The GFOA student chapter is sponsored by the Institute of Government and the UGA School of Public and International Affairs. UGA undergraduates and graduate students join the student chapter to learn more about the intricacies of public financial and budgeting procedures, whether or not they intend to become government finance officers in the future.

The UGA student chapter held its first meeting this fall with 12 students, many of whom are SPIA Master of Public Administration (MPA) candidates. The founding president, Ted Moeller, is an MPA candidate and graduate research assistant with the Institute.

Moeller learned about the importance of understanding government finances while working with the City of Roswell Recreation and Parks doing invoicing.

“I realized from working even a year in local government you need to know a lot about finance. I’m still learning how tricky government finances can be,” he said.

Gaining a better understanding of government finances through the GFOA chapter is an asset for MPA students, even if they aspire to become managers or supervisors instead of finance officers, according to Institute faculty member Tracy Arner.

“Partnering with GFOA to form this chapter is a win for our SPIA students as they now have access to GFOA training and other resources,” said Arner, who heads the Institute’s financial management training program.

Arner is serving as a GFOA student chapter mentor, as are SPIA public administration professor Katherine Willoughby and Alisha Gamble, finance director with the City of Flowery Branch and immediate past president of GFOA’s state affiliate, the Georgia Government Finance Officers Association (GGFOA).

Gamble and GGFOA President Chiquita Danzy, interim finance director with the City of Milledgeville, are working with Arner to develop a shadowing program that would allow UGA’s GFOA student members to spend a day with a local government finance officer to learn first-hand what the job entails.

UGA’s GFOA chapter is only the third such group in the country. Two GFOA student chapters were founded before UGA’s, at Virginia Tech and Florida International University. A fourth student chapter has since been organized at Auburn University at Montgomery.