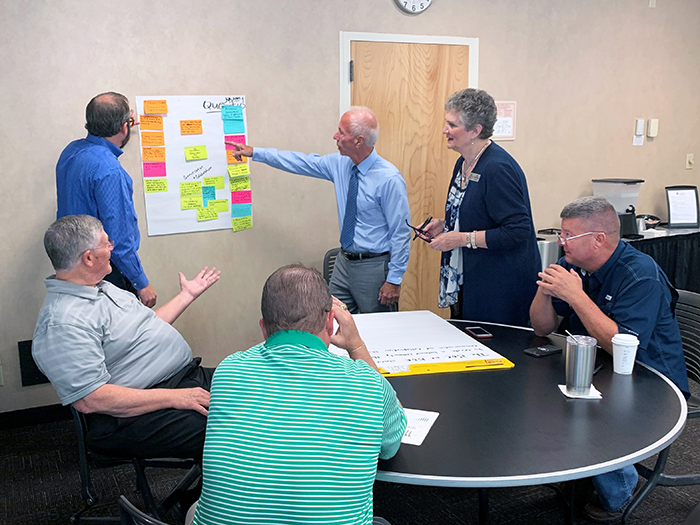 Jackson County school and government leaders explored opportunities to expand their collaboration at a recent two-day retreat facilitated by the Institute of Government.

Members of the Jackson County Board of Commissioners and Jackson County school system leaders emerged from the retreat with a joint action plan based on issues of equal importance to both local government partners.

According to Institute faculty member Russ Cook, the joint meeting was prompted by unprecedented growth and supported by newly elected local leaders.

“This retreat was a great example of county leaders building relationships and talking authentically,” Cook said. “Jackson County leaders saw a need to build on a foundation of collaboration through discussing their shared missions, their statutory responsibilities and their barriers moving forward.”

The school system and county government already work together on school resource officers, GIS services, Jackson County 4-H and other government programs. The aim of this retreat was to build on the collaborative efforts that already exist in Jackson County.

“We produced a plan to handle our growth,” said Jackson County Schools Superintendent April Howard. “This intergovernmental collaboration allows us to be efficient with our resources. The key to our continued success is an open channel of communication so that we can all work in tandem rather than in silos.”

The joint action plan includes measurable goals and action items, such as developing traffic plans for a new high school and negotiating a parks and recreation intergovernmental agreement.

“The Institute of Government and Jackson County both share a commitment to excellence in government, and I believe that this retreat gave Jackson County leaders new energy to continue working together,” said Institute faculty member Gordon Maner.

The Jackson County retreat, held at the UGA Center for Continuing Education and Hotel, is the second intergovernmental retreat that the Institute of Government has facilitated within the last year. Maner and Cook facilitated a retreat for Hancock County leaders last November.

A follow-up meeting is planned for mid-2020 to see how the two governments are progressing through their goals.

“Our retreat was very productive thanks to the initiative, facilitation and resources of the Institute of Government,” said County Manager Kevin Poe. “The plans produced at our retreat will improve the services we provide in Jackson County through a stronger relationship between our boards.”