To solve this problem, the Georgia Broadband Program turned to the Carl Vinson Institute of Government at the University of Georgia to create a map showing precisely which Georgia homes and businesses were served and not served by high-speed internet service. It was to develop methodology for more accurately defining an area or locations as served and then present that in visual form.

Leaders realized they could not solve broadband access problems in Georgia without better information. Before they could work to bring in more robust access, they had to know where it was needed – and by whom.

The Georgia Broadband Program turned to the Carl Vinson Institute of Government at the University of Georgia, which immediately recognized the need for new methodology. 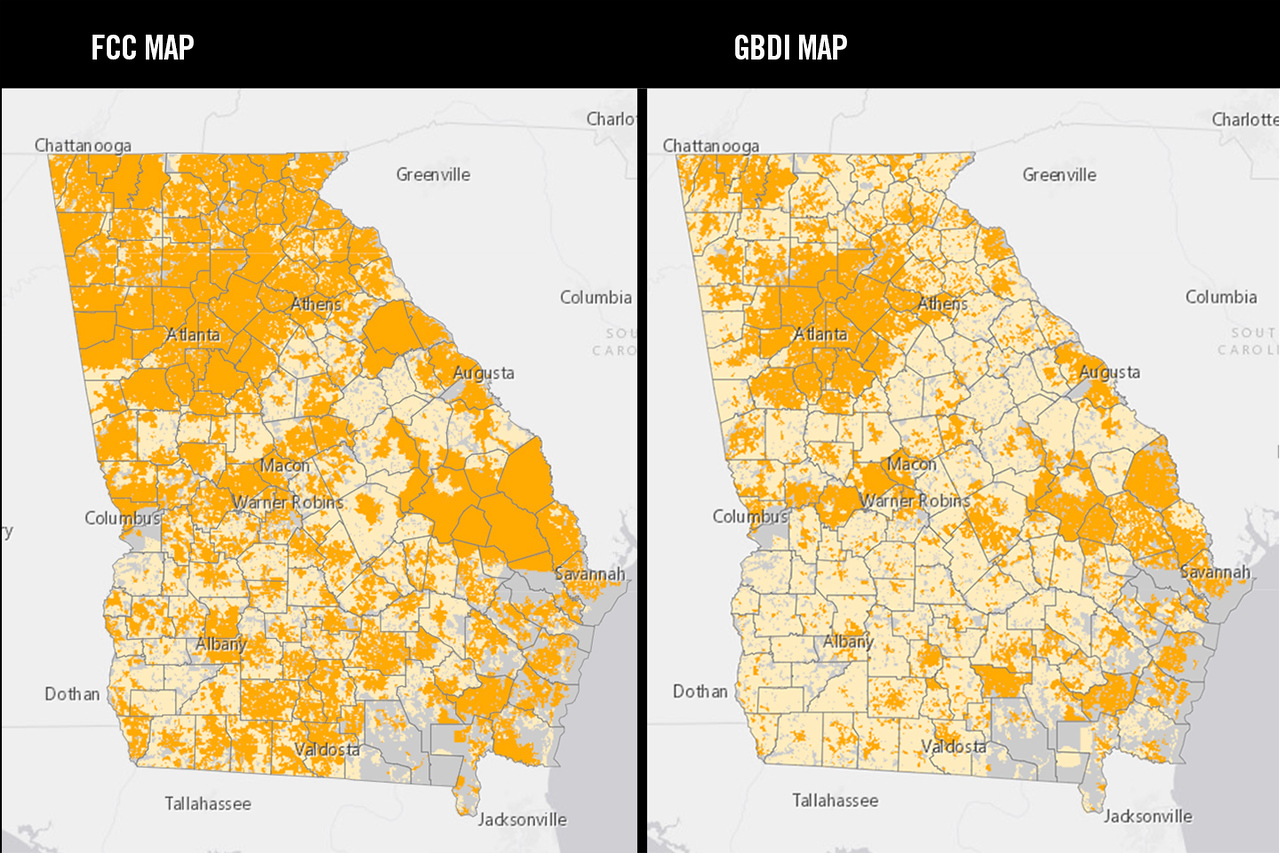 The Institute team saw that Federal Communication Commission (FCC) maps had the potential to ignore a great many locations – leaving many, many Georgians out of line for access.

For the map, the Institute of Government developed a new methodology to define “served” and “unserved.” This methodology more accurately depicted the availability – and lack – of broadband in Georgia. While the FCC had marked blocks as served if any one location in the block was served, the university felt a more accurate measure would be the rate of locations in a block, which it defined as “served” only if 80 percent or more of locations within had access.

Information was gathered for each business and residential address in the state and internet service providers were asked to share where they provided broadband. The location data was then laid against the service data and displayed in an easy-to-understand, interactive online map.

The team coordinated service data from 44 internet service providers, checking it against the state’s master address file and returning to providers for correction and confirmation before compilation.

The Institute of Government then used the latest mapping tools to create the views of broadband access that today appear on the Georgia Broadband Program website, https://broadband.georgia.gov/.

When it debuted in June 2020, the map set a new gold standard in broadband access mapping and made Georgia the first state to map availability down to the street address level. The Georgia Broadband Map was the first of its kind in the United States. It accurately tracks broadband dead zones down to a single address.

Unlike the FCC map – which considers a census block served by high-speed internet if just a single home in that block is connected – UGA’s map has a threshold of 80 percent of homes in a census block connected to speeds of 25 megabytes per second (Mbps) download and 3 Mbps upload.

When it launched in 2020, the map plainly illustrated a stark truth: About 10 percent of the Georgia population lacked access to high speed internet. That’s several percentage points higher than the FCC maps had suggested. And, while 10 percent might seem small, that’s actually more than 1 million people without service.

The more precise map means more communities will be able to apply for needed funds – both public and private - to develop broadband. It also enables state leaders to more confidently allocate resources for broadband, including a Georgia General Assembly commitment of $30 million.

What the map offers

The Georgia Broadband Map offers multiple views, including areas of the state color coded for served or unserved by broadband, a county view and a side-by-side comparison of the FCC map versus the Georgia map.

Numerous entities were involved in the map’s development and deployment. Governance is coordinated by an inter-agency team comprised of

Outreach has capitalized on workshops and webinars with community groups as well as partnerships with the Georgia Municipal Association and Association County Commissioners of Georgia.

How the map is helping